Halloween is over a month away. Like any holiday, you have to start prepping right away. Otherwise, you’ll miss out on getting the perfect costume and holiday decorations. The other day, I was scrolling down my Facebook news feed. Where I found these…..

ADORABLE ghost earrings! These little guys are cute, handmade, and unexpected. As I checked out Bethan Jayne pictures. I thought to myself, “Why not see what Etsy has to offer?” As we all know, Etsy never disappoints. I found ghoulish, and humorous accessories perfect for the Halloween season. Each piece has a certain tale or superstition attached to it. As I show you what Etsy has to offer, we’ll take a look at the stories behind these Halloween accessories.

Halloween would be nothing without bats. Bats are usually associated with the undead, vampires. It is believed that vampires must transform into bats to take flight. In the past, cartoon movies like Scooby Doo Goes To Ghoul School have embraced this notion. However todays books, television series, and movies do not show or mention the vampires transition from animal to man. Regardless, the bat is a Halloween symbol. If you’re in the Market for a Vampire Bat Necklace, you’ll love this…. 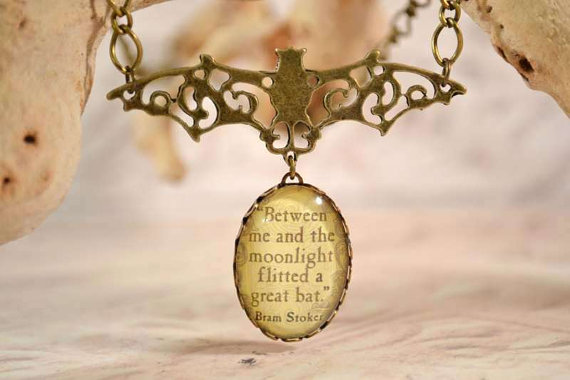 This tasteful Bronze Bat is accompanied by a Glass Pendant that contains a quote from Bram Stoker’s Dracula. If your want to show your Halloween spirit or you have a weakness for vamps, this pendant is ideal for you. Note, this pendant is not black or silver. The material used to mae the pendant sets it apart from todays generic bat or vampire jewelry. At a glance, it looks like a normal necklace. When you take a closer look, you see the bat and the quote. Overall, it’s unique and clever.

Are you familiar with Jack-O-Lantern? Jack was a man who was so evil, he could not go to heaven. He was so bad, the devil kicked him out of hell. With no place to go, Jack is left to wonder the world with his lantern till the end of days. Today, Jack-O-Lantern is refered to as the Jack the Pumpkin King, who is the King of Halloween in The Nightmare Before Christmas.  JAck-O-Lantern is not the only tale that comes from pumpkins. When searching for his head, The Headless Horseman of Sleepy Hollow often carries or places a Jack-O-Lantern (carved pumpkin) on his neck. If your interested in pumpkins, you can get dangling pumpkin earrings or a pumpkin patch pendant that is similar to The Nightmare Before Christmas. 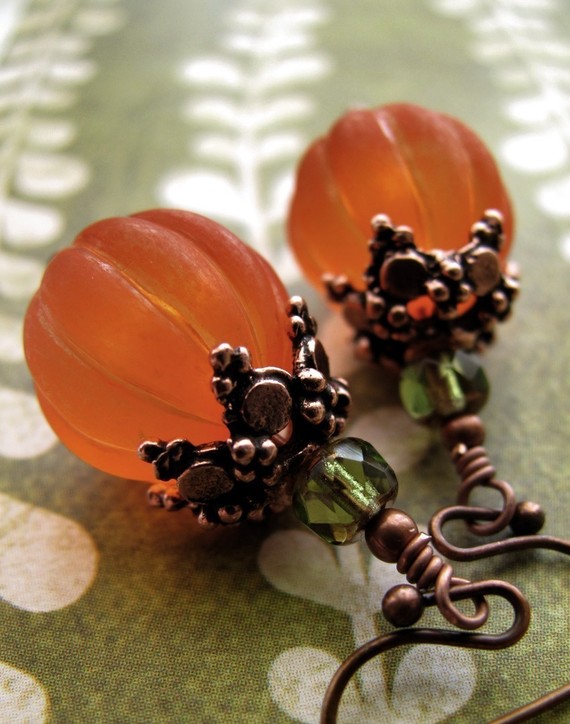 Each is unique in its own way. The earrings are appropriate for the office and a light day of pumpkin picking with the family. The pendant is ideal for Halloween parties to add a little terror to your look.

Since the beginning of the horror and gaur genre, the living head have been a part of it. The idea that a soulless corpses could rise from the grave and devour humans seems alluring and horrific to the modern man. This maybe the reason franchise like Resident Evil are doing well. For those not familiar with Resident Evil, the Umbrella Cooperation developed the T Virus. Since it’s out break in Raccon City, the virus has been used as a biological weapon. The victims genetic makeup decided how the virus would react. Most human infected became zombies. Others such as Nemesis were genetically mutated and altered by the virus. Unfortunetally, the movies and games are completely different. However, efforts have been made to place elements in the game into the film’s plot. The Resident Evil franchise is the only film/game that provides a reason for the zombie apocalypse. Movies like Dawn of the Dead do not. Though these have done well for themselves, there is one mini movie that is more famous than both…..Thriller!

I couldn’t do a segment about zombies without mentioning Micheal Jackson’s Thriller music video. We do not know why these zombies are rising for their graves, but we do know they are after Micheal and his love interest. Though both make it out alive, they is a unselting feeling that Micheal’s live interest may die soon…

You may wonder, “how can you rock the zombie look without costume make up and torn clothes?” Guess what…It’s Possible!

This Halloween zombie stich chocker pokes fun at zombies. Zombies of the 80’s usually weren’t able to keep themselves together. Today’s zombie industry makes the transition faster. The body doesn’t have time to decompose. As a result, most zombies have the limbs. In the past, dead men and women lay in their caskets. If they did change, they would have spent a considerable amount of time in their crypts. When a person dies, their body begins to breakdown. This is why some zombies lose their limbs. This choker will get you noticed and may turn a few heads too.

Do you purchase halloween jewelry?